In recent years, wind energy has developed around the world to provide a more sustainable alternative to electricity generation. In the United States, for example, the total annual production of electricity from wind energy has increased from 6 billion kilowatt hours (kWh) in 2000 to approximately 380 billion kWh in 2021. This represents approximately 9.2% of total utility-scale electricity generation in the United States according to US Energy Administration (EIA) information. And of course, there are still many challenges to overcome, but the progress deserves to be highlighted. Among these issues, a notable one is that of customers who are not always favorable to the construction of wind turbines (visuals, noise pollution, etc.), but also to the recyclability of the blades produced. The Belgian association From Waste to Wind was created to meet these challenges. It uses additive manufacturing, and more specifically Fused Deposition Modeling (FDM), to design wind turbines from recycled plastic. We met its founder Bram Peirs to find out more about this ambitious project!

3DN: Can you introduce yourself and your link with 3D printing?

Hello, my name is Bram and I am the founder of the non-profit organization From Waste to Wind. I gained valuable experience in the Flemish government, where I monitored the environmental effects of large wind turbines. Now I want to release an open source 3D printable wind turbine to the public with my own company. From Waste to Wind has already received an international award and additional support from the Antwerp Climate Fund in Belgium. 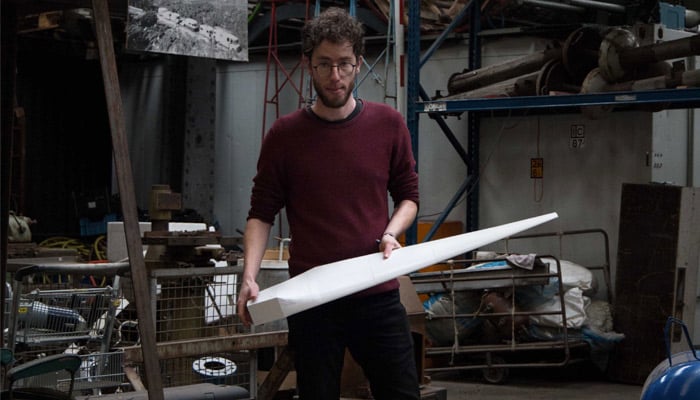 3DN: How did From Waste to Wind start? What is the idea behind?

Within the Flemish government, I have noticed that there is still a lot of resistance to wind turbines. However, there are already fairly strict rules to limit the impact of wind turbines on the environment. But people don’t know them. They are worried that the wind turbines will cause noise pollution and obstruct their view, so they don’t want them in their garden. I wanted people to look at them differently. I first made wind turbines myself from old barrels, with magnets from old hard drives. I loved being able to make something out of nothing. I met other people on the internet who were trying to do the same thing as me and that’s how things started.

We now work with Time Circus, an art collective that builds all kinds of things with recycled materials. They also run Loods 21 and Bar Paniek in Belgium. I learned that their homemade wind turbine had a broken blade. I restored it. The first blades were made of PVC sewer pipe, which was not very UV resistant. They were also working too well, causing the generator to fail. I then had the idea of ​​printing the blades in 3D. I bought a printer for 200 euros and I was able to work with people from a Fablab in Belgium. 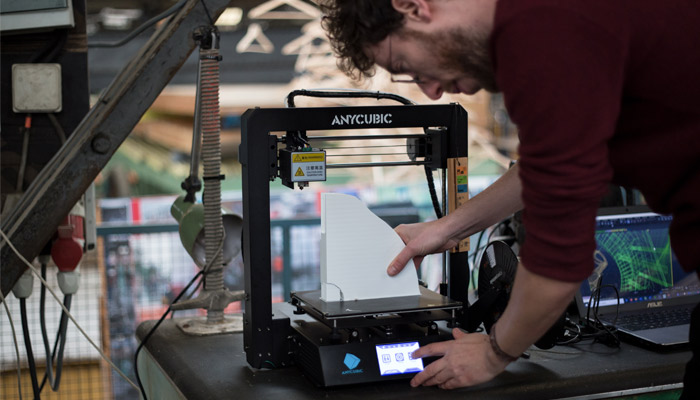 Plastic printing is not as simple as it sometimes seems, it can shrink and warp. It took us a few months to get it right. But at some point we had printed a completely custom wind turbine, designed by ourselves, in pieces of 20x20x20 cm, the maximum volume of our printer. This wind turbine has been working well for a few months. This earned us a $10,000 prize at Hackaday, an international platform for innovative creators. It was a good boost for us. It also confirmed that people are interested in being able to build something like this themselves.

At the same time, we also created the association From Waste to Wind. We want to break the barrier of renewable energy and small-scale wind power in particular, and bring energy production closer to people. Our business model today is primarily research and outreach. We do this with prizes and grants. So far it has worked pretty well. We also received a grant from the Climate Fund of the city of Antwerp. This is extremely important so that we can continue to work without depending on investors who want us to make a profit. We can chart our own course and fully focus on our social purpose.

3DN: How do you currently use 3D printing?

We installed a one meter long printing plate on the small Anycubic I3 Mega we started with. It was a real challenge in many ways: the plate has to be heated, causing it to shrink and expand. In addition, the power cables have to travel a greater distance.

A wind turbine prototype in rPET (photo credits: From Waste to Wind)

The big advantage of the large printing plate is that one meter long slides can be printed in one piece. Also, the horizontal blade print is much stronger than the vertical print because the adhesion between the layers is not as strong. We also installed Marlin on our printer, but the more exotic features like manual bed leveling had a lot of bugs. Finally, we made it work with an older version. This allowed us to print our second prototype.

3DN: In your opinion, is 3D printing more sustainable? Can it help reduce our plastic consumption?

Sure! First of all, there is the problem of blade recycling. When they reach the end of their life after 20 years, the fiber and the resin cannot be separated. The only thing you can do with them is to grind them up and put them in a landfill or reuse them in asphalt. In the United States, they are buried in a landfill.

The pure plastic blades can be completely recycled, unlike the fiberglass reinforced ones that other manufacturers use. We have deliberately chosen not to print with fibre-reinforced plastic, because with current means of recycling, the plastic remains “contaminated” and has much less potential for reuse. Only downside, we end up with a slightly heavier blade, but it does not matter if everything is well balanced.

But we have to use 3D printing wisely. Today, a lot of waste is created just for the sake of printing. Then there is the origin of the materials, which is rarely clear. For example, PLA biomaterial has to be grown somewhere in the world, then it’s transported to an industrial facility where it’s made into filament, and I’m probably missing a few steps. That’s why we use rPET, which is made from recycled PET, the same plastic used for plastic bottles. It needs to be recycled anyway and it is already available locally. It also has better mechanical properties than PLA. 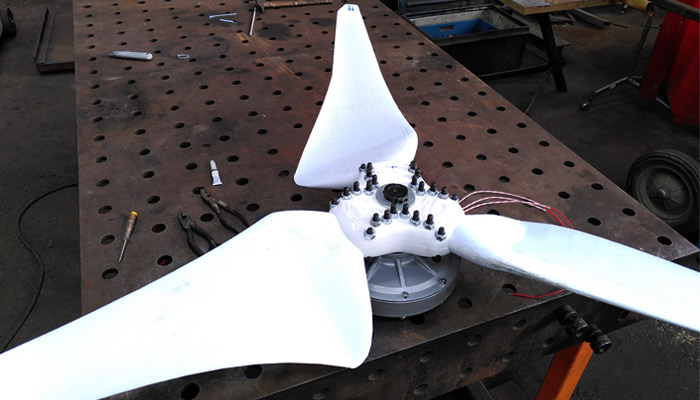 Finally, blades of this size are usually made with a mold and are completely solid. Printing allows us to make the blade partially hollow and save plastic.

3DN: What are the future projects of From Waste to Wind?

We were able to very quickly set up a production line for off-grid wind turbines (not connected to the electricity grid) with a diameter of 2 meters. But there are still so many promising new materials and techniques. We want to make larger wind turbines, 4 meters, which would produce 50% of the energy of an average family. Complementarity with photovoltaics is advantageous in Western Europe.

We want to connect all the wind turbines to the computer so that the “prosumer” can see at any time how much his wind turbine produces, but also the security parameters, such as vibrations. That’s why we make our own MPPT controllers, which will be completely open-source! In the end, our business model will probably be a little more mixed than purely open-source. We believe that a good product will sell itself. 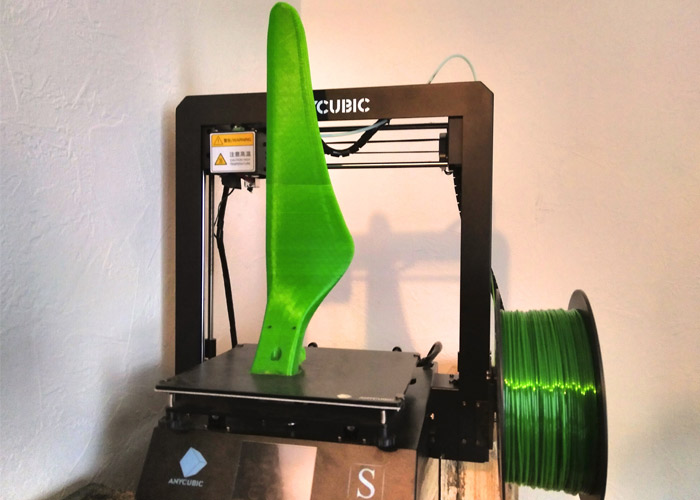 3DN: A last word for our readers?

We appreciate any kind of feedback and comments on our association and the way we work and we need support. Please feel free to visit our website or write us an email at [email protected] !

What do you think of From Waste to Wind? Let us know in a comment below or on our LinkedIn, Facebook, and Twitter pages! Don’t forget to sign up for our free weekly newsletter here, the latest 3D printing news straight to your inbox! You can also find all our videos on our YouTube channel.