A team of NASA researchers has developed a new metal alloy called GRX-810, which is 1000 times stronger than any previously developed alloy. Probably even more interesting is the fact that for this project, the team of professionals relied entirely on 3D printing. To be more specific, additive manufacturing was used to evenly disperse nanoscale oxides in the alloy, providing better thermal and mechanical properties. This gives the material the ability to withstand temperatures up to 1,093°C (33,9674°F) and could have a significant impact on the manufacture of, for example, rocket engines.

The metal alloy was strengthened by oxide dispersion, a method in which small oxide particles are dispersed in a metal matrix to increase its strength, heat resistance and ductility. Although NASA has not disclosed which metal was originally used, in most cases when applying this technique nickel or iron-aluminum alloys are used. Regarding the dispersion of oxides, it is also important to mention that the process is usually very time consuming and expensive. However, by relying on additive manufacturing and thermodynamic modeling, the team was able to significantly reduce time and cost, and also claim to have discovered the optimal alloy composition in just 30 simulations. 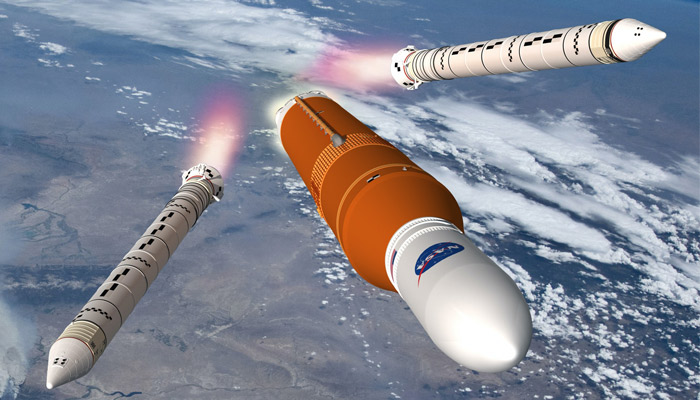 The new alloy could have an impact on the manufacture of certain rocket parts (photo credits: NASA)

Development and characteristics of the NASA GRX-810

NASA researchers used very precise computer models to determine the composition of GRX-810, particularly in terms of the amount of oxides used. They then used 3D printing to uniformly inject the nanoscale oxides. Although the exact process has not been revealed by NASA, this type of dispersion allowed them to quickly and inexpensively obtain an alloy that was durable, more malleable and able to withstand extreme temperatures. His strength has also been greatly increased. According to the team, GRX-810 is up to 1,000 times stronger than materials developed in the past. Dale Hopkins, deputy project manager of NASA’s Transformational Tools and Technologies project, added: “This breakthrough is revolutionary for materials development. New types of stronger, lighter materials are playing a key role as NASA aims to change the future of flight. Previously, an increase in tensile strength generally reduced a material’s ability to stretch and bend before breaking, which is why our new alloy is remarkable.

It’s easy to imagine the impact the NASA-developed GRX-810 could have on the aerospace industry. For example, it could be used to make jet engines to reduce fuel consumption, thanks to its greater durability and thermal resistance. In addition, operation and maintenance costs would also be reduced. When asked about the performance of GRX-810, the team explained that the alloy has twice the strength to resist fractures; three and a half times the flexibility to bend before breaking; and over 1,000 times more durable when exposed to high temperatures. Qualities that open up a field of possibilities for aeronautics!

This is only a first step for NASA, which intends to rely on thermodynamic modeling and additive manufacturing, to go even further in the creation of innovative materials. Tim Smith, materials scientist at NASA’s Glenn Research Center in Cleveland and one of the inventors of the new alloy, concludes:

“Applying these two processes has dramatically accelerated the pace of development of our materials. We can now produce new materials faster and with better performance than before. What used to take years through a process of trial and error, now takes weeks or months to make discoveries.

You can find out more HERE. What do you think of NASA’s GRX-810 alloy? Let us know in a comment below or on our Linkedin, Facebook, and Twitter pages! Don’t forget to sign up for our free weekly newsletter here, the latest 3D printing news straight to your inbox! You can also find all our videos on our YouTube channel.