A new article in the magazine Nanomaterials demonstrated the development of new 3D printed polymer composites incorporating fillers such as graphene using a solvent-free process.

The fabrication of thermoplastic composites incorporating different multi-scale reinforcements using 3D printing has been the subject of recent research in materials science. The incorporation of multi-scale filler particles can improve the properties of 3D printed polymers, such as their mechanical properties, electrical conductivity and thermal stability.

This area of ​​research has found application in the field of additive manufacturing due to its potential to improve the manufacture of fused filaments, a common 3D printing technology, by expanding the library of materials from which it can print. some products. Intense research over the past decade has been conducted on the synthesis of new polymeric materials for a variety of industries.

Several nanoparticles and microparticles have been evaluated for their potential to provide polymer formulations with improved properties in current research. Carbon-based materials, for example, can improve mechanical properties such as stiffness, increased corrosion resistance and weight reduction.

Microfillers such as ground carbon fibers and nanofillers such as graphene nanoplatelets and carbon nanotubes have been investigated in studies over the past few years as polymer composite modifiers. Nanocomposites incorporating conductive nanoparticles have shown great promise in 3D printed devices such as micro-batteries, electronic sensors and micro-circuits.

Studies have demonstrated increased toughness, increased Young’s modulus, tensile strength, modulus of elasticity, and many other beneficial properties of polymer composites produced using fused deposition modeling. The incorporation of multi-walled carbon nanotubes, for example, has a direct correlation between resistance change and concentration, with improved response at reduced loads.

Optimizing materials and production processes to maintain a balance between properties and processability is key to designing modified polymer formulations for the 3D printed manufacturing of products and components. The use of multiscale particles has been widely evaluated.

The authors used a novel solvent-free process to produce multi-scale composite filaments. The direct dispersion of different scale reinforcements in an ABS polymer matrix was studied in the article. Carbon-based filler materials (crushed carbon fiber, carbon nanotubes, and graphene nanoplatelets) have been used in research in different reports.

Common processing techniques such as twin-screw extruders and internal mixers were used to fabricate the multi-scale composites for the manufacture of fused filament components. The filaments produced have a diameter of 1.75 mm, standardized. The properties of the composite materials after production via 3D printing of fused filament fabrication were carefully evaluated in the article to highlight the reinforcing effects. 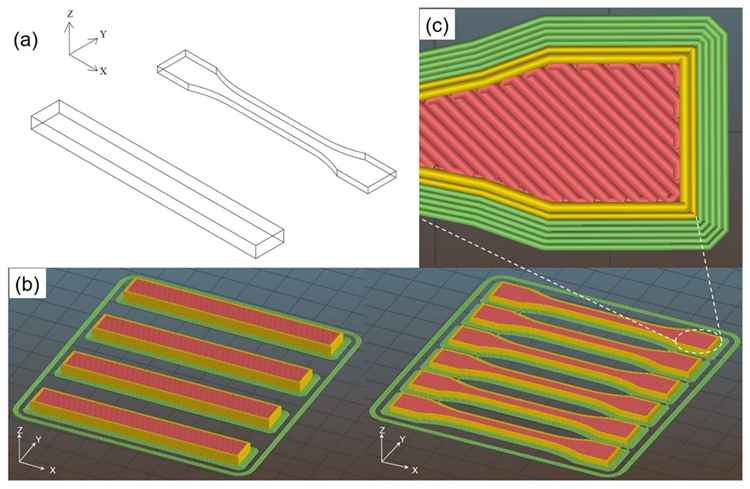 Diagram of the dumbbell and parallelepiped sample 1BA (80 mm × 10 mm × 3.8 mm) (a), the layout of the 3D printed samples in the Sil3r software (b) and fill pattern detail (vs). Image Credit: Residori, S et al., Nanomaterials

Several modifications of the properties of the polymer matrix were observed by the authors. Carbon nanotubes and graphene nanoplatelet fillers improved the modulus and strength of the composites, but the addition of ground carbon fibers reduced strain at fracture values. Nanofillers also improved the electrical conductivity of composites, with carbon nanotubes providing the greatest improvement in this property.

The final density and properties of the sample were strongly influenced by the production process. The samples suffered a loss of ductility of up to 65%, due to the presence of voids formed during 3D printing. An interesting observation made by the authors was that this effect was different in each composite. All carbon nanotube composites have low resistivity.

In addition, the authors presented both comparative and selective parameters to evaluate optimal compositions. The compositions were evaluated on the basis of processability and properties to elucidate their suitability for applications such as sensors and thermoelectric devices. 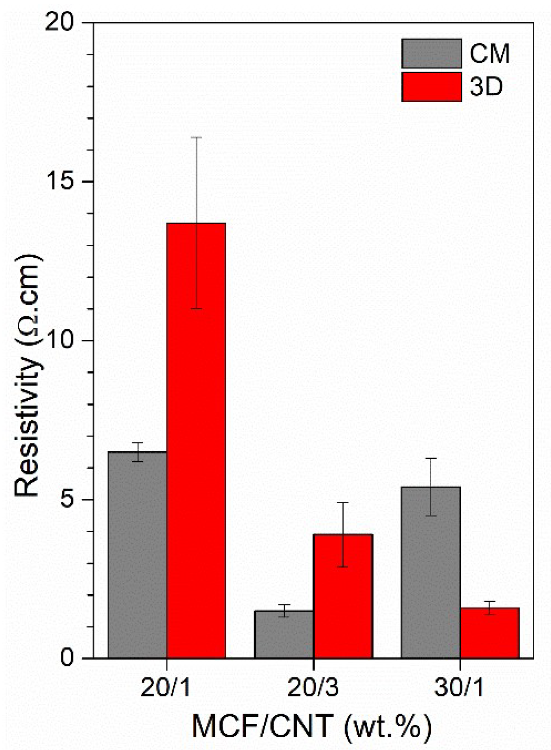 In the new journal of Nanomaterials, the authors highlighted a novel process for producing multi-scale polymer composites incorporating different carbon-based fillers. The printing filaments produced by this method of solventless direct dispersion with manufacture of fused filaments have been explored.

The process itself influences the final qualities and properties of the printed materials. At the same time, the properties differ depending on the filler used in the samples. The samples showed good mechanical properties and good electrical resistivity properties. The ratio of filler components also had a great influence on the properties. However, voids have been created during the manufacture of fused filaments, which can limit part performance.

Overall, the paper demonstrated a potentially advantageous multi-scale polymer composite production process, which will prove beneficial for a number of applications across multiple industries, such as sensors and thermoelectric devices.

Disclaimer: The views expressed herein are those of the author expressed privately and do not necessarily represent the views of AZoM.com Limited T/A AZoNetwork, the owner and operator of this website. This disclaimer forms part of the terms of use of this website.