Due to the ongoing COVID-19 pandemic, we are more aware than ever of the presence of harmful and easily transmitted bacteria and other microbes on surfaces. Carpets that adhere to it, some of which are slimy, are called biofilms and are often resistant to conventional disinfectants. They form complex communities and can even lead to life-threatening bacterial infections. But to eliminate this problem, a team of researchers from Montana State University in the United States have brought additive manufacturing into play to advance research on biofilm bacteria using 3D printing technology. The goal here is to be able to produce some sort of tool that helps replicate microbes. Researchers Zimlich and Thornton, who work at MSU’s Center for Biofilm Technology, have been working on the 3D printing device for two years.

Many tests and modifications later, however, they finally got their first hit: the research object, which consists of a grid of individual bacteria embedded in hydrogel – a transparent pudding-like substance – that they can dispose precisely at will, could be a great help for future bacterial transmissions. This is because, more specifically, it allows cells to be arranged and encapsulated exactly where they are needed to help fight bacteria. Specifically, the process involves imaging the microbes in the hydrogel and then solidifying the material with a laser to create an imperfect biofilm. Although only one type of bacteria has been used in research so far, if Zimlich and Thornton used other strains of bacteria, they could create more complex biofilms. 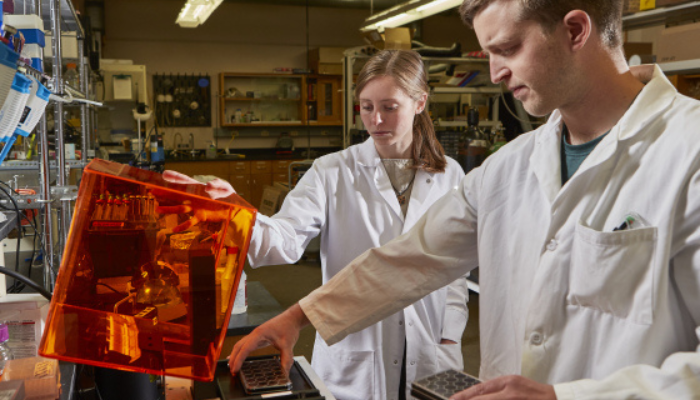 A forest full of bacteria

Comparable to a forest because of the diversity of life forms present, Zimlich admits that even the simplest biofilm systems are complex species. For this reason, they felt it was their responsibility to fight off microbes that may even be resistant to antibiotics. This is the case, he said, because cells at the lowest level of biofilm present are encapsulated from oxygen and enter a dormant state, rendering drugs ineffective against them. According to Phil Stewart, also a researcher at MSU, this phenomenon is explained by the fact that the bacteria have already undergone so many biological changes that such drugs are partially ineffective. The further development of such drugs is therefore inevitable, so that all forms of bacteria present in the biofilm are attacked. However, Zimlich is optimistic and describes his idea to combat such a situation with bacteria, commenting: “One thing that is becoming clearer is that it is possible to treat these pathogenic bacteria by modifying the environment of the interactive biofilm instead of trying to use harsh chemicals.

But to further develop such treatments, many tests must take place in a controlled environment such as a laboratory. And this is where the 3D printing tool finds its way. “We believe it is possible to construct analogs of how these pathogenic biofilms form naturally,” says Zimlich. With around 30 collaborative partners, the MSU research team also says in its statement that their research could even be of great interest to companies such as Procter and Gamble, 3M and NASA. More information about the project can be found HERE.

Do you think bacteria will soon be easier to fight thanks to 3D printing? Let us know in a comment below or on our LinkedIn, Facebook, and Twitter pages! Don’t forget to sign up for our free weekly newsletter here, the latest 3D printing news straight to your inbox! You can also find all our videos on our YouTube channel.